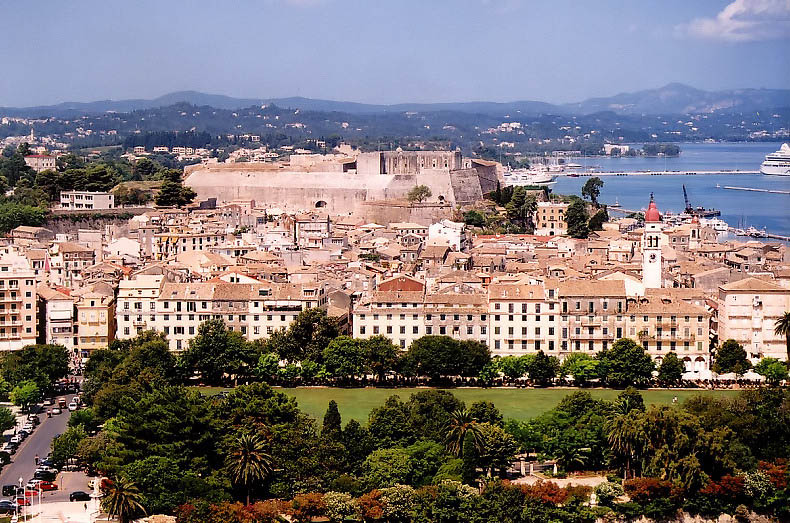 There are plenty of places to visit in Corfu. From beaches,little villages to museums,forts and of course the famous Spianada square. Spianada is located in the heart of Corfu town,in front of the old fortress and its beauty makes it one of the most beautiful places to visit on the entire island .Also,Spianada being the biggest square in the Balkans and one of the biggest squares in Europe, is a huge attraction both for natives and tourists.

The locals differentiate Spianada in two parts. The upper square and the lower square.

At this part of Spianada you will find only one cafeteria,which is located on a small part of the square,the rest is like a park. There’s a fountain surrounded by flowers and trees and going further into Spianada you can see two major monuments.

The first monument is what is called in Greek “Ta eptanisa” which in English translates as “the seven islands”( of the Ionian sea). What you will see there are marble plaques,that each represents one of the islands and has the island’s name engraved on it.

The second monument is a very old round aqueduct which can remind you of the way old Greek monuments look like.

In between these two there is a big park where during most time of the year kids that live in Corfu town go to play soccer and other games. There are benches,grass and trees all around the upper square where you can seat,relax and enjoy your surroundings and the clear view of the sea.

On the contrary,the lower part of Spianada is were some of the most popular and most visited cafeterias of the island are located. The most famous name of lower square is “Liston Square” and it’s probably one of the most well known places in both Corfu and Greece.

The most characteristic thing about Liston is its architecture. Being built by the Venetians who had taken over Corfu for many decades,gives it a special touch and while being in it,it doesn’t feel like you are in Greece. It’s almost as if you are in a part of Venice (without any canals of course) .

A big part of the lower part of Spianada is the cricket field(an 8es kanto na einai sundesmos k na odigei sto post gia to cricket field).The cricket field of Corfu is the one and only cricket field in the entire country. During spring and summer many matches and tournaments take place there while the rest of the time parents take their kids their to play.

For the history of Spianada we have to go about 600 years(!!) back,to when the Venetians had control over Corfu. See,during the 1400’s the town of Corfu was located inside the old fortress of Corfu but at some point around that time and a few years after Corfu was taken over a new Corfu town was starting to be built outside of it .This new town though had no walls leading no protection. That is when the Venetians decided to create a huge square right in front of the old fortress in order to protect the new town from possible future hostile activity.

The history behind the name “Liston Square”

Back in the day of its creation,Liston square was only accessed by nobles whose names where written in a list on a book called “Libro d’Oro”(Golden Book).The word “Liston” comes from the Venetian word “lista” which means “a wide and straight street to go for a walk” and also “catalog“.It is said that Liston took its name after both these meanings.