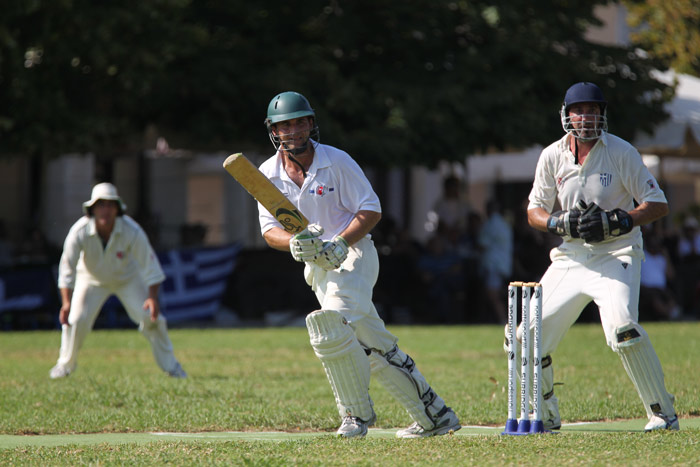 While the rest of Greece was taken over by Turkey,Corfu was taken over by numerous other countries but Turkey,one of those countries being England. The 50 years the British had Corfu under their control have left a mark upon Corfu. A big part of British entertainment of that time has been a part of the island ever since and that part is cricket,England’s national sport.

With cricket being their national sport and considering all the time they spent on the island, the British decided they wanted a cricket field in Corfu. So,in the early 1800’s they made a cricket field in Spianada square. After the British navy officers had their first game in 1823,the natives of Corfu showed much interest in the game and they asked the officers to teach them. The officers accepted the offer and taught the natives how to play cricket .It took the citizens of Corfu a full dozen of years to learn the sport good enough but when they did there were two Corfiot teams formed and they played against the British.

After that,cricket became a big part of entertainment in Corfu and even after the Greek island was freed from the British and reconnected with Greece in 1864,cricket continued to be played by natives as tow new teams were formed(which,due to lack of players were latter merged into one) and it is still played until present days.

Nowadays the cricket field in Corfu is the only one in Greece and every year during spring and summer many games from teams from every country in the world where cricket is played take place there. Thanks to it’s location,which is on the right of Liston square,it is accessible

by everyone and on the time of the year when no matches take place people can just go and play with their kids.

A through-back to the history of cricket

Cricket’s history begins around the 16h century,in southern England where a couple of centuries later it grew to be the national sport.

In the 19th century cricket begun to be played in other countries besides England and by now there are 120 million cricket players all around the globe,making it the second most played sport in the world.